We started our first day on the Northern Circuit by hiking up to Taranaki Falls, an hour from Whakapapa Village. The weather was beautiful, with clear blue skies, sun and barely any clouds over the mountains. We enjoyed some shaded trees and more open brush. The waterfall was a great place to cool off before continuing on the fairly open and treeless terrain.  The trail wove its way through the low brush between Mt. Ngauruhoe and Mt. Ruapehu with perfect views of the mountains. There were no real climbs or descents but it was our longest day. It took us a total of six hours including breaks to get to the hut. The hut is incredibly nice for a backcountry hut. Solar powers allowed for electricity and hot water for cooking. There were two kitchen areas with four stoves tops each and a large living room with two separate bunk rooms. There was also a large porch with restrooms just a two-minute walk out the back door.

In the morning a friend and I followed some others to Oturere Stream, 20 minutes from the hut for a swim. I jumped into the water and I felt the cold immediately freeze my body. As I waited in the freezing water I waited for my friend to jump and felt my feet numbing. I could not stay in for any longer and we walked back to start our hike. The second day was much shorter however a little more dynamic in landscape changes and in terrain. We started with a short downhill to the Waihohonu campsite followed by a half hour long up hill over a ridge. We descended again into a forest with a raging river in the valley and crosses over to begin another uphill climb to the top of another ridge. Atop this ridge, instead of descending, we continued up along the ridge and stopped by the only small patch of trees at the top. We then continued along the ridge and watched the landscape changed rather abruptly from shrub land to desert gravel.  From here the path continued along the side of the mountains with several big uphill’s and downhill’s. The final uphill was very steep and covered in rocks requiring some climbing up and over to the top of the plateau. It was not much further to Oturere Hut. It took us not more than three hours including a long lunch break. This hut is a little bit more primitive with much less space and no solar panels (more like what I was expecting). There is a stream just down the side of the plateau that was perfect for swimming. The water above the waterfall was much warmer than the morning’s river.

After a steep ascent up the mountainside we reached the Emerald Lakes. They are a brilliant electric blue, yellowing towards the edges. The sulfur smell is strong as the mountain emits a hot steam from the side of the crater. There is still a difficult uphill climb to the top of the Red Crater. Four of us took off ahead of the group and began slowly moving up scree. The path is about five feet wide with steep drops on either side. This is not too narrow however a 40lb pack, walking on scree made it difficult to balance and continue walking. Although that final ascent is merely about 150 vertical feet, it took at least a half an hour to climb. Peering into the Red Crater from the rim, I could see a broken jagged scar surrounded by rough lava rocks. The view from the top was gorgeous in all directions.  Seeing Mt. Ngauruhoe (Mount Doom) up close and personal is incredible and terrifying at the same time. The mountain slopes steeply and has a starkly red face towards the top. A large lake can be seen in the distance the opposite direction of the volcano and our path up the mountain is to the other side. A small group of us took an hour out of the day to climb Mt. Tongariro at this point. The fog closed in on us as we began our hike up and we were only able to get glimpses of the crater below Tongariro. The were more day hikers than I have encountered on most other hikes except for maybe Angel’s Landing in Zion National Park. Tourists from all over the world were day-hiking the crater. The descent was extremely difficult because it was very steep and there was no sure footing. It took a while but eventually we got down to the crater below and walked on that flat for a kilometer. From there Mt. Ngauruhoe was directly beside us and the dark lava rocks covered the sides of the mountain. We continued long a gradual downhill until we reached the restrooms. From there it was an hour to the car park and it was flat terrain along mostly boardwalks (it is a floodplain area). The fog was closing in as we finished our trek. 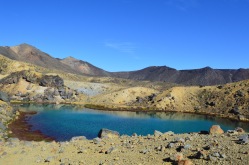 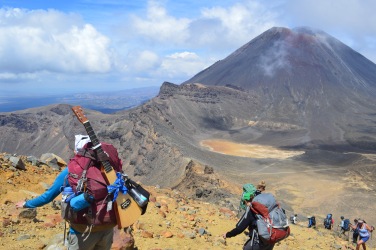